This month, OLN Inc would like to recognize Jefferson Nagy for his excellent leadership performance on our team

Jeff joined the team just 4 months ago and made the move across the country during OLN Inc‘s expansion from Nashville to Los Angeles. He has already emerged as a top-performer in the company. The president of OLN Inc shared, “Jefferson takes initiative and makes no excuses. He is loyal, competitive, seeks out coaching, and doesn’t take things too seriously.” 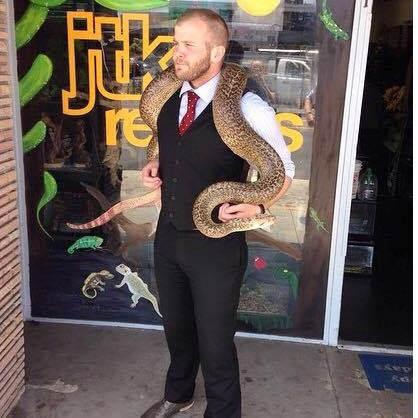 We asked Jeff to tell us about his experience working with us, and he shared: “At OLN Inc I’ve learned how to get comfortable being uncomfortable.” A valuable skill, indeed!

One of 3 children, Jeff hails from Nashville, TN. Growing up, he spent most of his spare time playing hockey and making music. “I started playing the music venues of Nashville when I was thirteen and continued to do so until I enlisted. I got a lot of experience booking and promoting music in the bigger name venues in the city, as well as owning and operating a music recording studio, working primarily with aspiring artists in the local scene.”

Jeff served our country in the United States Marine Corps for 4 years. Then before joining OLN Inc, he worked in the airline industry for American Airlines and Saia LTL, Inc. He much enjoyed the flight benefits, but didn’t particularly love the corporate environment… which led him to OLN Inc!

In his spare time, Jeff most enjoys playing live music. “I’m down for some pick up puck any time, as well,” he shared, “but I’d say I’m having the most fun when I get to do something for the first time. I’m super open minded and am always trying to get the new experiences locked in.”

Jeff left us with these final thoughts: “I moved to California for two reasons: to see a dog and to get promoted. I just saw a dog.” I guess we know what’s next for this top-performing leader! The OLN Inc team looks forward to see his continued progression as he moves closer each day to a management role.

To learn about career opportunities at OLN Inc, visit our careers page. For entrepreneurial inspiration and company updates follow us on Twitter or connect with us on LinkedIn.